What’s that big dark bird overhead? Why does it have a bald head? Does it just soar around and around? Why does it wobble? Will it fall out of the sky? Why is its head so small? Ewww, what’s that stinky smell? If these thoughts have crossed your mind recently, perhaps I can help.

You’re likely observing a turkey vulture. Larger than a Canada goose, turkey vultures are big birds of prey. Unlike their hawk, eagle and osprey cousins, they don’t catch their food. Vultures are scavengers, the sanitation disposal squad of the bird world, and they eat carrion – the flesh of dead animals. Soaring on warm updrafts, they use their keen sense of smell to find ripe carcasses such as roadkill.
Often the body has started to rot, so it’s mushy and full of maggots. That may seem gross, but it’s nature’s way. Vultures are not powerful birds and rely on decomposition to break down the flesh of their prey. It can get pretty messy so vultures don’t grow feathers on their heads to keep them clean and maggot-free. That’s also why their heads seem small – no fluffy feathers to make them bigger. 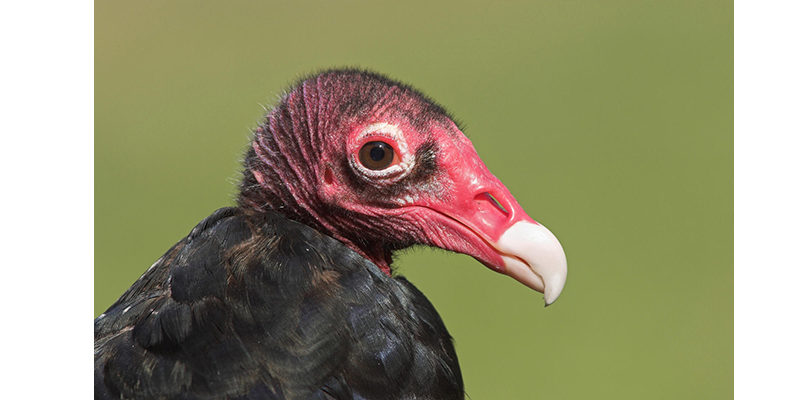 They have long wings with two-tone, dark and light grey, colouring and hold them in a slight V-shape to aid with manoeuvring on the currents of air. The feathers at the tips of their wings are spread out like fingers. They rarely flap, preferring to soar. If the updraft is strong, they’ll often circle around inside the rising air pocket and scan the breezes for the scent of their next meal.
Vultures are sometimes featured in western movies. The hero is left out in the desert by the bad guys to be devoured by “buzzards,” their accomplices in evil. Far from this nasty reputation, vultures are actually a vital part of the food chain by taking care of carrion. Without them, dead animal bodies would pile up and diseases would spread. They’re not the cutest birds in the world, but they are an essential part of a healthy ecosystem.
Cool facts:
• Its scientific name, Cathartes aura, means “golden purifier” or “purifying breeze.”
• Their stomach acid is very strong. This lets them eat carcasses with rabies and not get sick.
• When it’s hot they may defecate on their feet to cool off – yuck!
• They may vomit as a defense strategy – double yuck!
Nancy Melcher is The Nature Nut. Send details of your sightings or questions about the natural world to: general@melcher.cx