After dropping the first game of their quarter-final Cougar Cup playoff series against the Little Britain Merchants 4-2 last Wednesday night, the Uxbridge Bruins fought back to win the next two and move on to the semi-finals. The three-game series was a low-scoring affair, with both teams accumulating only seven goals each. For the Bruins, however, six of their goals came from the Joshua Cammalleri-Daniel Giorgio-Toby Copper line.

Cammalleri scored the series’ first goal in the second period of the first game, blasting a clean shot into the Merchants’ net from the blue line. Cooper was given the assist. Little Britain evened the scored, only to see Giorgio notch a short-handed marker when Cammalleri stripped the puck off a Merchants attacker, giving Giorgio a clear run at the net. Little Britain replied to tie the game again. A late goal by the Bruins was disallowed by the referee, although a video clip appeared to show the Little Britain goalie had stopped a shot and allowed it to fall at his feet, where it was pounced on by the Bruins’ offence.

Little Britain scored two unanswered goals in the third to take the game. At the arena on Friday, it looked as though the Bruins were in trouble as the Merchants applied sustained pressure for the first 10 minutes of the game, out-shooting Uxbridge 26-10 in the scoreless first period.

In the second period, Spencer Mazakian missed a golden opportunity to score on the out-of-position Little Britain goalie in the first minute and the rest of the stanza went back and forth until Giorgio scored on a power play with less than five minutes remaining. Assists went to Adam Turner and Justin Bennett.

The battle continued in the third. As time wound down, the Merchants pulled their goalie for an extra attacker, but Dalton Strongman scored into the empty net with less than a minute remaining to give the Bruins a 2-0 lead. The Merchants did not give up, spoiling Cam Smith’s shutout attempt with only 26 seconds left on the clock, but it was too little, too late.

The Merchants outshot the Bruins 65-35.

The Cosmos selected Smith as the Bruins’ player of the game and Riley Young for the Merchants.

Back in the icy confines of the Little Britain Community Centre on Saturday, it was another close tilt between the evenly matched teams. Little Britain took the early lead, opening the first period with an early goal, while the Bruins had another goal disallowed. Cooper scored an unassisted marker to tie it up, but the Merchants scored again to take a 2-1 lead into the dressing room.

Cammalleri, assisted by Matthew Hunter and Giorgio, scored within the first five minutes of the second period and Giorgio put the Bruins ahead with a power-play marker, assisted by Cooper and Cammalleri.

However, the Merchants never gave up. In the third period, with one minute left to go and Bruins’ Cameron Gillis in the penalty box for tripping, Little Britain pulled the goalie for an extra attacker. They swarmed around the Bruins’ net and finally put the puck over the goal line, but the goal came just as the buzzer sounded and the ref also ruled the net was off the pegs. It was time for the Bruins to celebrate.

Bear pause: Last week, the Cosmos erroneously reported North Kawartha Knights had been awarded top spot in the Orr Division because, although tied with Clarington for points, the Knights had a better win record. However, the Eagles were given the nod because they had the better record in head-to-head match-ups. 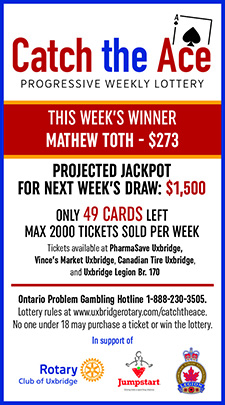